October 29, 2010
Or a not-quite-full-force-fagmunch. However, he is dead either way. In his place stands a newer, increasingly faggy me. Woe unto the world for the loss.

See, there's this sweater I've been seeing at work (American Eagle Outfitters). I really really really fucking want it. Check it out, babes*. Yes, it's $149.50. But I want it. And imma gonna get it.

Back to the point, though. So, sure, I may get 50% off from that price, thus having to pay only $74.75, but that's still more than I've ever paid on a single piece of clothing in....well, ever. The most I ever paid for any one splooge of an item was about $27 for a sweater on clearance at Express Men a few months ago, and even that was a shock for me to accept I'd actually done.

See, I'm a thriftboi at heart. Or was. Or was/am. I recently bought a sexy lil American Eagle t-shirt for like 2 bucks at a local thrift store. Versus the $30 it probably cost in store....

But then there's this blue snowflakey sweater thing* that's got me so worked up in a tizzy. It's still about double what I've ever paid for any one piece of clothing ever. Some might argue that alone doesn't make me necessarily more faggy. Except for the reason, for the justification I make in defense of that cost.

"Because it's so pretty."

I'm willing to pay nearly triple what I've ever paid for any bit of clothing ever because it's pretty. I mean, it is, isn't it? Pretty, that is. And would probably look very good on me. Bold colors look good for people with skin as pale as mine, afterall. Plus, it brings out the blue in my eyes, I'll bet.

* EDIT: 2011/02/03: just in case those bastards on the AE website take down or have already taken down the page about this sweater, here's a picture! 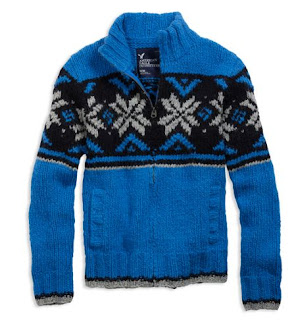 Glory in it. Glory.

June 29, 2019
I decided I want to dig in and take this blog, and more broadly the "Palmerpink Brand" as it were, more seriously. Ok, maybe not that  seriously, but yeah. I wrote up a larger exploration on my other blog of initial questions to lay out some basic considerations regarding a revamp, asking things like the What, Who, and Why of this blog. Some of these things I'd explored previously , but I wanted to dig into deeper this time around. In short, I want to use this blog to share things I find meaningful and hope others will be interested in, as well as reflections and updates about my life; I want to write for myself, but also people who care about me and/or the sorts of things I share about (eg, reviews about culture and such); and I want to commit to my voice mattering, to deciding my blog matters to whatever little degree it can. (I also floated the possibility of culling posts that are no longer representative of what I want in this blog, as well as any stupid lab
Post a Comment
Read more