October 12, 2010
I'm pretty sure that cyborgy-suit Michael Ironsides is wearing has something hard and sandpapery viciously shoved up his va-jay-jay. I mean seriously! 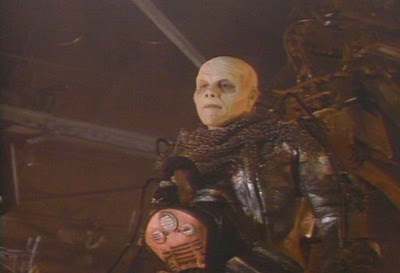 Here, she's just looking smug & smarmy, but....
I actually watched this a while back and've been saving it up for a time like this--when I felt bad for neglecting the blog for a few days yet had nothing much to say. Mhm. I'm a strategerist, that I am.

Anyway, I'll say this much before I forget: despite everything pining for the contrary, Spacehunter: Adventures in the Forbidden Zone actually isn't that bad of a movie. In fact I'd say it's rather good. Still fucking hilarious to riff à la MST3k :) Which was where the title for this post came from. The first time this "Overdog" character is shown s/he does this haughty spin around to see who approaches and has this mean ole frown on his/her face. So of course, quite naturally, "Sigourney Weaver is PISSED" just tumbled outta my mouth. Easy as that.

It's got a pubescent Molly Ringwald (in a Sci Fi! I know! wtf!!), a vaguely ephebophilic/elektra-complex engendering Peter Strauss, a veeeery greasy haird Kate Moss-alike android that gets dead'd then melted early on (SPOILER, whoops...cuz nobody will ever see it coming; right.), and some black guy. Hey! I watched this like 2 months ago! Give me a break if they all look the same to me after that much time!

I'll make quick reference to the all-around bible of my newfound religion (Bad Movie Ology) by linking to the badmovies.org review; def watch that movie clip lower down. It's kinda priceless. I think it was, at least.


Meanwhile, I've been trying to figure out what makes this movie so much fun. See, it's not exactly due to terribleness (as with Star Crystal, another movie I've 'reviewed' here) or goofiness exactly (again, as with Star Crystal).

Hm. Well, I guess it is a little goofy. With all those adult adiposes (Doctor Who; ignore me) running around; what badmovies.org quite rightly observes are amphibious Amazons; that Germanny, mutant Morrissey with an external...spleen?; 3 earth sluts in shiny suits; an army of creepily cooing, molotov-tossing children; that bizarre death-game; and the cyborgial Sigourney who talks like The Claw from Inspector Gadget; I guess it kinda does qualify as "goofy".

Still, though, what's interesting (for probably nobody else but me) is that it's actually altogether fairly well put together. Despite all those weird little diversions, the plot flowed remarkably well. They actually worked--if in a "We are venturing through a weird, hostile, alien planet that is full of weird, hostile, alien things that'll surely hinder our progress--but of course we'll persevere and proceed and save the day!" kind of way. So yeah, it is a bit goofy but without feeling particularly cheesy. That's the thing.


I was also amazed to discover Molly Ringwald was apparently built for buddy flicks. She's got that perfect mix of obnoxious and adorable so that she grows on you over the course of the movie. She's also only barely got tits--hey, let's pretend she's a 12-year-old boy! XD Apparently she was fifteen--you know, according to maffs--but I'm not convinced.

What a terrible time to get your menarche....
Lastly, I will admit this movie probably has bad replay value. You know, like video games--good replay value means that you want to replay the game/enjoy or would enjoy replaying it. I feel like the fakey, made-uppy language Molly Ringwald spews (because it's The Future!) would become even more grating, even if I've stolen "brainworking" from it. Apparently it means "to think or figure out". Apparently.

(Speaking of brainworking, I'm still baffled by the opening. Big ole fugly-ish starliner gets zapped by some nebula/accretion disk and 'splodes. Lulz. But you'd think that some mondo-space-cruise-ship intending to 'splore something that zappy and dangerous would have been designed for it. Like, not liable to splode upon first zap. :\ Apparently there's no Consumer Product Safety Commission in the future....)

As a parting gift: