November 15, 2010
So I decided that, in the spirit of originality, to declare Mondays henceforth be known on this blog as "Bad Movie Mondays". So that means (at least?) one of my infamous bad movie reviews a week. Hopefully this will force me to start working through my ever growing collection of bad movies/to maybe someday get good at reviewing movies. We'll just have to see, eh?

This week's movie is a gay softcore porn/artflick called Laserblast. No, seriously, it's some kind of sci-fi thriller/horror thing--but this kid is ragingly gay. But tragically closetted. As you can tell, I heckled this one with some gay friends.

For those of you who'd like a competent review of this movie, please check out my new lovers--though they don't know it yet--over at Mad Mad Mad Mad Movies.

Naturally, those guys already have screen caps of a bunch of the stuff I was gonna rip off from the movie. Plus much better organized reviewness. Naturally.

However, I took some screencaps of my own and I thought I'd share'em to, you know, look more professional or stuff. Also, I'll share a few gems from that night with my gay friends. For the record, it wasn't just some inside joke we fags came up with. I knew from the moment "Billy" first tumbled out of bed in just his boxers that he was a fag. 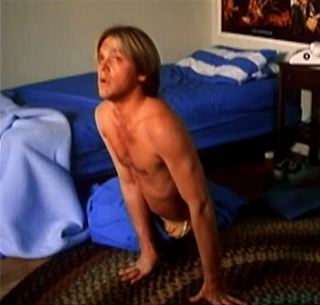 As the plot unspools, we soon discover that he is very unloved. An outcast. A tragic, sullen figure whose own mummy skips town to get away from him. (Don't worry, it seems he totally takes a dump on her luggage, so he has some vengeance.) This is probably because he's gay and that's gross. That's just how it works, obvs. Also, angst is terribly attractive.

Life gets gayer for the angsting teen closet case; teen heartthrob/Peter Davison on steroids and his twinky nerd boyfriend challenges him to a race but Billy's truck won't even start. And it gets worse. 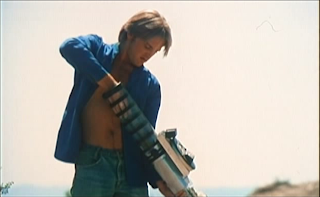 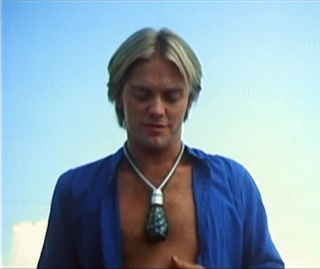 Awww yeah, boyyyyyy....
See, after he finishes teabagging himself with the power source necklace of Fabulosity, and blasting his....gun all over the place.... all this violence unleashes the evil mutant alien Hyde inside this troubled youth. In short, his inner Diva. The poor kid. 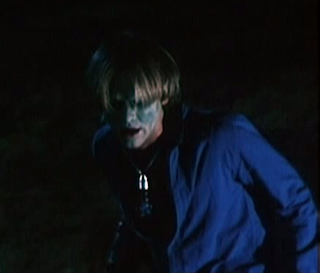 The gayness escalates--fake fucking his fake girlfriend/beard, fake saving her from his crush--that muscley Peter Davison--and so on as the authorities close in and he feels less and less inhibited, this is truly a coming of age story that any space-laser-dildo-wielding gay man can surely relate to.