November 30, 2010
*sigh.* As I'd somewhat feared, Bad Movie Monday failed; instead I'll throw together a half-assed 'Bad Movie Tuesday' even if the corny name doesn't work the same.

As I might as well have also promised the other day, this review might be a little disappointing, too. I ended up having to watch/heckle MetalStorm: The Destruction of Jared-Syn on my own, which proved to be more than just a little difficult.

Don't get me wrong; I imagine this movie could have some really great potential. However, it's a little dry. At least, so much so that I--but one, lone, tired homo--couldn't handle it all on his ownsome. Even despite its having a pneumatic gonorrhea discharging dildoman in the cast of villains.


I really want to give this movie another chance. It has a lot of awkward lines, shots, and acting, plus the hero has this constant look of bewildered displeasure--like he has no idea what's going on, ever, but is frustrated and disappointed by it all the same. This is the stuff good riffing thrives on. 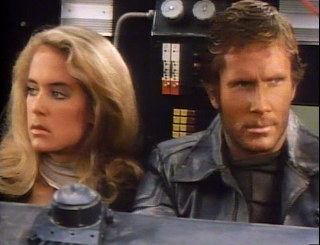 "I thought you said you gave great roadhead..."
The trouble is there's a lot of scenes with no dialogue--all those pointless chase scenes for example--and although I can get a decent start with some of them, it's hard to sustain the momentum without anyone else chiming in.

Riffing, I feel, is at its most gratifying when there's other people to riff with. Even if they contribute only a little or nothing at all, just their presence seems to feed the riffing. It probably also helps to not be the only one laughing. Yeah, probably....

As was the case with MetalStorm, multiple riffers could have each contributed different kinds of jokes from their different perspectives, backgrounds, etc. With a movie like this--where nothing happens for protracted though still plainly absurd stretches--that's a necessity, it seems. These kind of spans have their own brand of awkwardness that can be funny in its own right; at the very least they give you a lot of opportunity to make riff after riff, callback after callback, and generally slaughter the movie ("You can't spell 'SLAUGHTER' without 'LAUGHTER'!"). But, again, this is precisely why I needed other riffers.

Some movies you can get away with riffing on your own. Gymkata (an upcoming attraction/review, I swear!) is like that. It's just so...silly/stupid/weird yet still tries to take itself seriously. Plus, stuff happens. Silly/stupid/weird stuff, but you have a lot to work with to make the funniez.

What sucks is I had some other riffers at the beginning. And it was terrifically funny--we cracked eachother up hardcore. But then two of them bailed to do breederly things--but just boring shit, like snuggling! So it was just me and this other fag, who apparently was tooooo tired to be useful and fell asleep. But even when it was just us two, it was still good for the riffing.

But once it was just me...some shit was still hilarious, and I still mostly had fun, but.... Frankly, I think it would have been a challenge even for the MST bots. However, their writers would watch those movies several times to accumulate a good bunch of callbacks and riffs. So maybe that's what this movie needs, too; a re-viewing.

Which I already plan to do. So this may not be the last you'll hear about MetalStorm, but whatever I do for next Monday--and future Mondays--I hope to be able to put more preparation and planning into the reviews. Often I'll regret rambling as much as I did in some reivew or forget to make some definitive joke/comment. But yeah. Metalstorm may make a comeback when I've been able to properly watch it with proper riffing.