February 22, 2011
One of these days I'll actually bother finishing that Schlock! documentary about exploitation films. Because most every movie I'll likely review here will prolly be some kind of exploitation or another. I've already reviewed a drugsploitation, some STDsploitations, and even an automobilesploitation.


The first movie we'll look at this week is the 1987 Redneck Zombies. We're talking the director's cut, people. The rated release cut out all the splatter and even the last 8minutes of amazing and tried to add in some plot. Not cool.
So, basically a bunch of rednecks use a barrel of toxic waste to build a moonshine still. They serve up the resulting “monster mash” shine to the whole town.

Meanwhile, a group of college kids are meandering the woods looking for a place to camp. They get mostly eated by zombies.

The movie is well paced and gorey. Pericles Lewnes, the director, went on to do special effects for other Troma releases, such as SGT. Kabukiman NYPD. He knows his shit and is damn good at it. Not only are the zombie effects great, but there's two major (psychedelic) freakout scenes.

Besides the special effects, I also enjoyed the strange trance inducing quality I've seen in other Troma movies. (They're just so weird!)

Funny note, I had forgotten how much I hated those goddamned college kids for their obnoxious acting. Hell, I'd forgotten I was even capable of such hatred. I found every gorey death scene immensely satisfying.


Our second movie is Creature from the Hillbilly Lagoon. It's only about 6 years old, and maybe it needs more time to age and fester to, you know, become properly bad. To me, the first third feels unbearably slow. The pace does pick up—right around when shit actually starts happening—but the movie still moves forward stiffly & with little conviction.

Floundering; that might be a good word for it. Which is funny considering the “Creature” is a fish-man-thing. 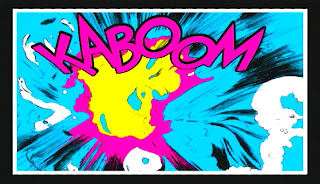 The effects aren't too awful. Interesting note, some of the effects scenes are replaced with comic-esque animation. Also, the opening credits.


You can make fun of HL well enough, with the right group of hecklers, but it doesn't make it terribly easy. RZ, even on its own, does an excellent & well-balanced job of making fun of itself. It also boasts bunches of Awesome like tons of splatter and gore and violence and weirdness. By comparison especially, Hillbilly Lagoon has that sort of awkward conventionality you might expect from somewhat 'sploitier Syfy Original Movies.

As a movie, I think Redneck Zombies is the clear winner. Creature from the Hillbilly Lagoon is still worth watching, but there's little contest with the weird, magical allure of Redneck Zombies.


Now, with the preliminaries out of the way—on to the subject matter being exploited: The hicks themselves.


The rednecks do so much for Redneck Zombies. I guess that's kind of obvious, but seriously. Remember how I said I hated most of the characters in this movie? Well, not so much with the actual rednecks—they were by far more amusing than infuriating. Their acting kinda good, even appropriate. They actually felt kinda rednecky.

Also, the moonshine still made from a barrel of toxic waste and resulting toxic moonshine was an excellent touch and an ungodly contribution. It's wacky and outrageous, but somehow in line with redneckery. Or at least stereotypes and the exploitation thereupon. It's part of what makes this movie so fun.


On the other hand, I felt let down by Hillbilly Lagoon. I mean, yeah, it's got hillbillies. Sure. But they seem so marginalized and tame. Maybe it's because they're not as party to the monster in this movie—just another bunch of victims. Maybe it's because they didn't feel very convincing or hicky. I swear one guy kept slipping into a Brooklyn accent.

The title feels like a gimmicky cocktease—Creature from the Hillbilly Lagoon. There's not even much screen presense of a lagoon, nevermind that of actual hillbillies.


So, yet again, Redneck Zombies is the clear winner.

Funny thing, both movies have a gay (?) hick in them. RZ's homo (?) hick is better for two major reasons: one, he's played by the director, Pericles Lewnes, himself; two, the one from Hillbilly Lagoon dies within 5minutes of being introduced. Not much more to say about him, I guess.

I was starting to feel bad for Hillbilly Lagoon so I figured I'd give them at least a cool pointz. So in this “round” I'll assess the monsters themselves!

Redneck Zombies is a zombie movie. A remarkably good one, too. The zombie effects were kinda fantastic, especially considering the apparent budget. Still zombies, though. Cool, funny zombies, at least. 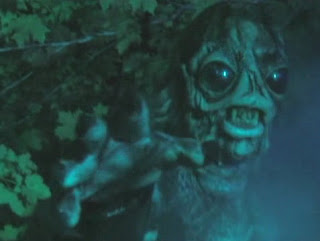 The “Creature” from Hillbilly Lagoon is, to quote, “a 6ft tall striped bass”. Wowza. Creativity points? Sure. Why not.


Well, Redneck Zombies is (still) our winner! I kind of wish I could have found better competition. Ultimately, Hillbilly Lagoon isn't as much a bad movie as it is a bad hicksploitation flick nor does it make for as good a watch as Redneck Zombies makes.