Holy shit, guys, who'd'a thunk I'd make it this far or this long? Well this post's a grab-bag of goodies, yessir it is. Glasses, birthdays, new look & feel, and even an amusing story! and possibly even more!

So, Parker and I turned the “snowmergency” a few Wednesdays ago into an epic quest of epic quality. It was pretty epic, man.

See, my dad has a condition where the vessels in his fingers shut down, as with frost bite but at the slightest chill as opposed to the severe sorta cold(damage)/hypothermia that usually triggers frost bite. It sucks. Wish I could remember what it was called.

So anyway, he's out getting groceries at the local shoppers. It's a monster blizzard—the Snowmergency as I declared it—and he's getting groceries. I guess it's reasonable. Somehow he manages to not only lock the keys inside the car but with the car still running. My dad's awesome, just like me!

Parker and I are immediately recruited to go on this emergency rescue mission. Mein Vater isn't really prepared—glove-wise—for this kind of weather. Good man. Love that guy. But point is, this blizzard is harsh.

See, last year we got hit with what I call (and apparently I alone) the Snowpacolypse. We got hit with like 2-something-feet of snow in a matter of a couple days. We were especially screwed because the snow-plowing-fund was totally tapped out. Joy!

What made this blizzard the “Snowmergency” was that we got about 7ish inches in a matter of hours—all at once and during rushhour. Slick and slickering roads + shit visibility + wind & snow uuuuurvrywhere, I'm sure someone somewhere faced a snow-related emergency.

Meanwhile, Parker and I have to traverse this shit to get to my dad and get him mom's backup set of keys. So we trudge away—at first forgetting our trusted charge, the keys, cuz we're just awesome like that and liked backtracking ¼ of the total distance—through snow and wind and lightning. Dude, there was lightning. It was like—flazash--pink purple blue. Have I mentioned how much I love DC weather? :D

Anyway, we make it there, with cars squelching past us, the kawelching of snow under our feet. Surrounded by the spontaneous CRACK of branches breaking at random. Struggling against the constant impediments of snow in our eyes/down our coats/in our sleeves. Braving mountain ranges of fresh plowed drifts. And finally, we reach Shoppers.

My facebook status through all of this read: “Tophie Palmer is venturing out into the Snowmergency with his trusty biffle at his side to rescue his estranged father from the icey catacombs of the neaby Shoppers. Wish him luck.”


So my new glasses. Remember when I wrote about them? Like a bunch of times, right? Yeah. I'm on top of this shit, dawg. With, like, pictures and stuff...oh wait.

So, yeah, they arrived! They're awesome. I had some issues with depth perception—the first night I wore them was the Snowmergency and, Jesus, everytime I looked down as I shoveled snow I felt like the ground was tilting precariously away under me. Also, it's still a bit hard at work for some reason. It's like I'm looking everywhere constantly but I can't see it all at once or something so it's tough on my brainz.

But Jesus it's good to see. Like I just got up from a nap a lil while ago and I was trying to edit this post without my glasses on—and, dude, not happening.

All the same, I smell a fashion shoot!!

If you can't tell, birthdays are kind of weird for me. I tend to forget them—even my own. Even when they're on calendars or reported to me by facebook, I forget'em. Worse, up until recently I didn't even have the disposable income to get people presents if I did manage to remember their birthdays. And even when I could get a gift, I never know what to get. Birthdays, in short, frustrate me.

I also have an annoying tendency to contemplate stuff, and birthdays are an annoying opportunity to indulge that. When I remember to.

This time around, I had help. I was having dinner with a friend Saturday, and I kinda “let slip” my birthday was the next day. After the usual excitements, he asked a rather unusual question, “So how was your 23rd year?”

I thought about it a moment, and replied it had been a real experience for me. I grew up a lot over 2010. I also fucked up bunches and hit some of my lowest lows but, as a whole, haven't ever been happier. And that's been really nice, actually.

As for my actual birthday, I spent the evening with the same friend, his friend, and some cupcakes. Later on, that same friend and I snuggled up to watch a bad movie, which I reviewed yesterday. It was a pretty nice birthday, really :)


So a while ago, I cannot remember exactly how long, I “commissioned” Parker to do a fancy header for this blog. I just didn't find the plain ole verdana “facepalmer.org”. I wanted sumt'en fancy. With, like, a picture drawn in there too.

Well, after much prodding and nagging, Parker finished it. To be fair, he'd held it ransom—he wanted me to record something for some video of his, and I did kinda drag my feet (it was really a problem of noncoinciding availableness). But I did it! And he did it! And I redid the whole layout to go with the new header! So now you've got this brand new, sexy look for the same old, sexy blog!

For those of you who have neither previously visited my blog nor intend to actually get off your asses/feed readers and look at the new look & feel, here's a before & after: 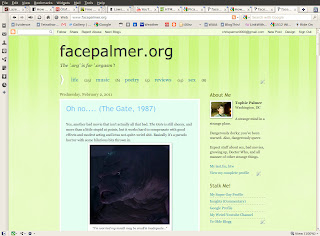 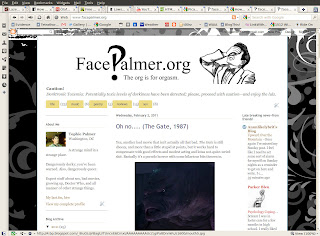 And now the amusing story. I hope you all are amused, verily. I certainly was.

So I was at the diner last night with my friends. There are some ladies sitting a few tables down—older, somewhat rotund, but ladies, apparently—and as I'm eating my food they get up to come ask me how the onion rings are. I look at my onion rings and tell them they're pretty good. Because I'm clearly such an expert on onion rings.

Naturally I found it all rather odd—their getting up just to inquire after onion rings—but I'm not gonna judge. Not yet.

Anyway, I forget about them as I banter about with my friends and finish my burger. My ride and I are tired, so we start heading out. I get up to go pee, he gets up to pay and say his goodbyes to the rest of our friends. Because this is the Bethesda Tastee Diner, I have to go past the Ladies again.

The largest one all but grabs my wrist, daintily of course, and asks me my name. Casual as always, I tell her it's Chris. One of her friends—wearing pink—asks again about the onion rings, on a scale of 1 – 10, and I do my best. “Er, they're pretty good—” “She's craving them—” “—No, she's craving them!” “Er, if you're craving them, then they're probably worth getting.” After a bit more talking (about nothing, what else), Largest asks me how my onion rings were. Again. As in, right after I told her friend & her what I thought of them.

She asks me my name, again, and tells me hers, again, and starts asking about what I'm wearing—my super cool kitty tshirt I found at a thrift store. Damn them for noticing. It started a whole monster tangent of a conversation. Which I handled with grace and casualness, but goddamn!

The inquisition continues, her with her catty eyes and strange questions and touching, and re-asking my name and reintroducing herself. I continue glancing back to my ride, who's still chatting with our friends—apparently he was pulled into a conversation and I was left to fend for myself.

At one point, Largest asked, “Oh, could you call my friend's cell phone? She seems to have lost it....” And I truthfully told her I'd left mine in my car (just as her friend “found” her phone). I'm pretty sure even if I had had my phone I wouldn't have fallen for that. Probably wouldn't have handled it much better tho.

But I had to get myself out of there. They were asking a lot of questions—many in fact repeating the same inquiry and I couldn't tell how much it was the drunk or just them struggling for something to keep me there.

“Um, well, I've got to get going but, um, I needa pee first, so, um, imma dash off and do that, but it was lovely meeting you.” And narrowly escaped.