March 09, 2011
I loved yesterday's Penny Arcade comic, Pokémorality. Naturally, I haven't played anything of Pokémon White or Black, but I did used to be a raging PokéNerd in middle and even a bit in high school. 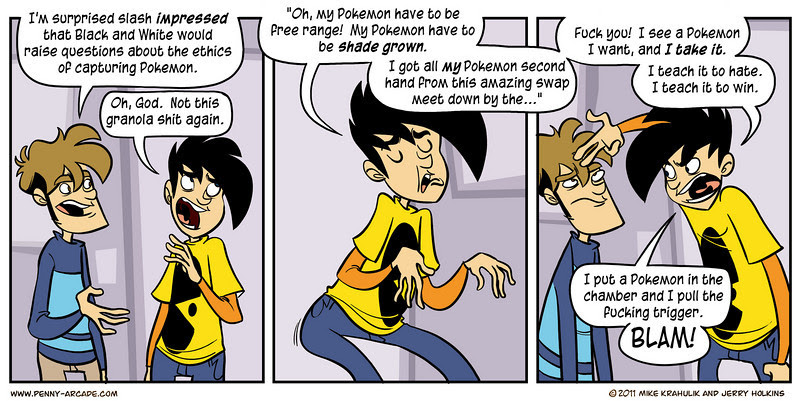 I always used to scoffed--and even still do sometimes--at Professor Oak's lil poké-speech he'd give after you beat the Elite Four and RivalFace. He'd go on and on and on about how RivalFace had lost because he didn't love his pokémon; he'd used them as a means to an end, they were, to him, a means of winning and had not earned their love and trust. As for me, Oak would go on to say, I had won because of the love and care I had raised my pokés with.

That was a pile of raging pokéshit, and we all knew it.

Much like Gabe in this Penny Arcade comic, we taught our pokés to hate, we taught them to win!!! As with almost any game character--especially such replaceable, interchangeable, undying game sprites as these buggers--our compassion and morality regarding for them is shallow at best*.

Of course, this might be why I never won a single player-vs.-player linked battles, ever. Hm.

Meanwhile, some degree, however viciously spurious, of pokémorality was always a part of the games. But apparently it's more hardcore and less superficial in the new games. Fascinating. Maybe I'll go and acquire them. And a Gameboy. To play it. Hm. This could be costly....


* Raging exception being, of course, Aerith/Aeris from Final Fantasy VII, who made all us nerds cry.