May 10, 2011
So many of the bad movies I watch are from bygone (?) eras in which women were little more than punchlines with tits and indentured housekeepers/babymakers. The dismissive, even derisive, way women were portrayed in film, then, shouldn't be too surprising. Most of the time women were "used", rather than "portrayed", in film.

Some manage to do so in ways that still manage to surprise/boggle/entertain my mind. So many to choose from, really. Like, pretty much any pre-1990s thriller/horror/sci-fi flick would probably do.

But I've chosen Angry Red Planet (1959) because, in my opinion, Planet is just too good an example to pass up--it's what originally gave me my angle on this review. Frankly, I'm not entirely sure if it's hilarity comes out of caricature or failed correction of the norm.
And with that, I'll kick off what may turn into a long running, if only occasionally humored, series. Read on for the funny:

Maybe I'm just too gay to care or too willfully ignorant to pay attention, but I've never gone into women's studies much. (Hell, I'm not even sure I spelled "women's studies" right.) As such, I probably can't do the discipline much justice in this analysis, so I probably won't even try beyond a few nuggets of knowledge.

(EDIT: apparently this is the first post I've ever tagged "women". Wow. I really am an asshole--or a faggot.)

At some point, I'll have to watch that documentary, Schlock, and some of its sister documentaries, like Massive Tits and Tons of Vaseline, if I hope to do much with this "series". I feel like I'll find some brilliant quote from some producer demanding the female characters "be given fewer lines but show more tit".

Anyway--back to the good stuff!

Part of me actually wonders if Angry Red Planet attempted to present a strong female lead in Dr. Iris Ryan. At the least, it's a female lead (of sorts)--in 1959 for goodness sake! That's pre-women's lib, I think. If so, it's almost kind of an impressive effort. Afterall, she's a doctor--of biology/zoology, but that's still a science (mostly...).
However, in so many other ways, Planet fails terribly but typically in its regard for women. Despite being a lead in the film and some kind of a doctor and even saving the day (kind of...), Iris is still every bit as much of the follower, the klutz, the screamer/fainter, and sexualized object as any of her contemporaries. It was really the first thing I noticed about the film.

Before I watch any of my bad movies, I like to do a little "preview" by jumping to the middle and then hopping around a bit. In this movie, I jumped right into the scene pictured below. It pretty well summed up everything about that era's treatment of women--on and off the screen. 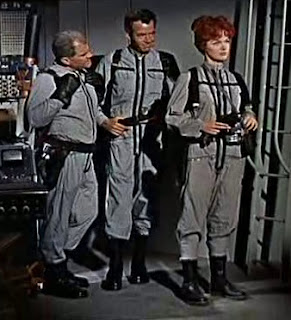 In it, the tubby on the left is complaining that women--er, as he puts it "beautiful young dolls"--shouldn't wear space suits because he can't see all their "beautiful curves". And, as if that weren't bad enough, almost before she can even finish her next line, Iris sees an alien at the window, screams, and faints. At this point I knew this movie was going to be hilarious.

The movie made it too easy, really. I readied every misogynistic one liner I could think of--everything from "it's because you're a woman!" to "why aren't you in the kitchen!?" to "where's my goddamn sammich!?"--and still the movie beat me to the punch some of the time: At one point Iris herself even says "Is it because I'm a woman??" 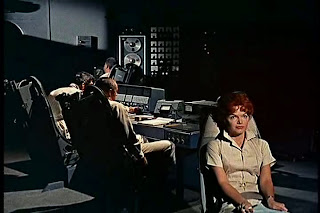 When the rocket's in flight, it's readily apparent Iris is sequestered thoroughly out of the way and only barely still on screen. She reads some meaningless numbers and looks pretty for the audience while the men take care of the real work of landing an interplanetary rocket.

Granted, her "expertise" is entirely irrelevant to landing a rocket (and really, logistically, should have been irrelevant to the whole mission to explore mars....) but does she really have to be set off to the side like that? Sigh.

Did I forget to mention she's actually telling the whole story to us? See, when the rocket returned she was the only living/conscious crewmember, and, although in severe (hysterical, of course) shock the doctors need to pump her for information in order to save the only other living crewmember. Such significance! Such heroism! So what if she didn't land the rocket, or do anything but nurse the guy and worry until space control could remotely land the ship for her.....
I love how after she freaks out once or twice and slips into deeper shock, they suggest drugging her to loosen up her memory. This apparently has the side effect of making the story "more subjective"--that is, things will appear as they seemed to her more than as they objectively happened (scary stuff = scarier, for example).

Back it on up. This is classic (and about the only nugget of women's studies I can muster). This is such an old movie paradigm: Bitch screams/feints/goes into shock lots & awkwardly; bitch must be hysterical; let's drug the bitch. It's what happens in the original House on Haunted Hill. This one girl has seen some legitimately scary/freaky shit, but no one believes her and they assume she's just hysterical--so they sedate her*. For her own good. Keep the little lady quiet while we figure out what's really going on even though she's actually dead-on right.

Granted this is kind of the opposite--they drug Iris because they need her to talk more, but still they basically don't trust the little lady to go through with it on her own. Odds are they wouldn't have drugged a man. Sigh.
Despite my exasperation, I actually enjoyed this movie a good deal. Even faux-misogynistic jokes aside, there's plenty to make fun of in this movie. It's pretty goofy. Some parts are slow--like the first 20 or so minutes of mostly stock footage--but everything on the rocket & planet is absurd.

It's in many ways something of your classic creature feature mixed with regular space travel and more general...sitcom in space. But the mix ends up entertaining, through no real merit of its own of course. I think what makes it enjoyable is that mix of various potentially appealing/amusing elements and a couple of bonuses--like the totally warranted women jokes and utter absence of plot logic or character development.

This movie might not be as outright universally appealing as some movies I've reviewed--like The Gate or The Car or some others I'm totally not remembering--but it's still more watchable and certainly more enjoyable than certain other films I've reviewed. It's definitely worth a good heckle.

* Ironically, the ancient world's cure for hysteria was quite different: Sex. Lots of it. And babies. I suppose it's still another way of subduing the vociferous, confused young lady, but.... And that's the only other nugget of women's studies I know.