May 10, 2011
So I think I've mostly gotten April outta my system. Esp the bemoaning certain boys over 4 separate posts. Fingers crossed....
One good sign, though, is I wrote a sad poem the other night that had NOTHING to do with that guy I was all minces butthurt about. Seriously--wasn't even thinking of him. I was actually thinking of an old love of mine, who, as far as I know has been roughly where I have in terms of enduring troubles and accomplishing life goals.
Anyway I recorded what snippets I had here on the Droid, so maybe next time I have my headphones and a pen I'll work on it some.
It's gonna start with:
Where have we gotten to with our lives?
In these last twenty-four years,
We must have been headed somewhere.
With something like thissy too:
It's hard to say where we lost our way
Since I'm not sure we ever really had one.
And end with something like:
Contentment aside--I just want
Something to hang on to,
Someone to hold close,
And somewhere to go.
It's a totally different kinda melancholy--can ya tell?? Last month was all spurned-and-hurty feeling and longing and wanting, but this poem expresses a sense of being lost, purposeless, even value-less.
I've said it before, though; Marcel makes anything more bearable. He's better than any boyfriend and doesn't care if I'm achieving life's every dream--though I imagine he'd be pleased if I were.
Ah, good friends are priceless. Anyway if anything more comes of this poem I'll post it over on the kitty blog. (EDIT: i meant "litty blog"; I'd change it but this does have a pic of Marcel so it's very kitty based :) 06/07) 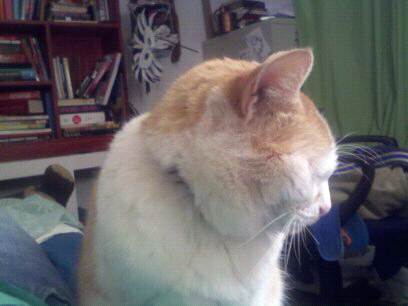