My cat is dying.

July 03, 2011
No need for a clever title--my cat Cali is dying. I should have known it--even a rotten tooth or jaw couldn't really account for this much weight loss--but it took a visit to the vet to find out.

She has a "growth", a "mass", in her stomach. The vet put her money on lymphoma but whatever it is Cali probably doesn't have too much longer.

She's 8 1/2 years old, and very sick. Even if we could fork over the thousands and thousands for a full run of treatment--surgery and chemo--she probably wouldn't live for even another year, maybe not even half that.

We've gone the mostly humane, cost-effective route. (God, that's hard to justify....) She's on cortisone right now and some pill; or some bluey stuff and a pill-form of cortisone. Whichever. They're meant to ease her pain and bring bck some of her appetite (the growth in her belly is probably causing her severe feelings of nausea/fullness).

I need to call the vet. I don't want to know too much; certainly no, and pardon the pun, deadlines and to some degree nothing too much in terms of signs and symptoms. All I want--I would be content to get even less than a month with Cali as long as it's more than a week. I just want to hear that much time is possible, plausible at least.

I've had daily cries with her as we've snuggled. I've written and am working on a poem about it. I'm beginning to accept it. It's really hard because I've never been in this position; all my previous pets have run away or been given away. I was never very close with the only two we've actually put down. So I'm still a bit overwhelmed with a sense of unfairness--for her behalf.

She's just so little, and so sweet. It was always like she never actually grew up--such a little runt, such a princess. She's gorgeous--I've posted pictures before and will post more--even now, when she's sick as hell. I remember what an adventurous, flirty, playful little brat she could be. Such a hussie. Always rolling over on her back with beckoning eyes to "present" herself as a greeting and encouragement to play. Such beautiful green eyes, with orange and black and white, smooth as silk, so gracefully distributed. 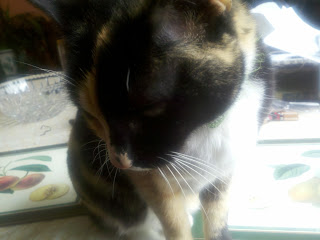 That touch of regality about her. Nothing too pompous, not monarchial; just.... She used to lie about so leisurely, as though all she wanted in life was to lay herself out in the sun on the dining room table and be content (and seen). Similarly, she's sometimes just sit and watch, quiet as can be, either observing or absorbing the goings on around her.

She used to walk so stiff leggedly outside--as though to say "dirty, dirty, ew!". She loved watching birds but (as far as I can tell) never caught one, maybe even never bothered. She did like catching bugs; those were a real triumph for her.

She still loves to snuggle. She likes being held close and stroked gently, rhythmically, along her jaw or behind her--just small, little circles or back & forths would do. She insists on curling up on your chest when you're lying down. If you're lucky, she faces you; if you're less fortunate, she'd face away....

I'm writing a poem for her. The first day we knew, I held her before heading out for a meeting. I didn't mean to cry, and I wasn't at first. But as I said "You'll always be my little girl...", it just happened. I couldn't hold it back. The poem started from this--from the things I said to her as I held her and cried. On our way to the bus, I wrote it in a note on my phone and transcribed it later.

I'm still working on it, but I'll try to post the draft to the literary blog at least. It's in a pretty good state but I want to look over it.

Meanwhile, in only a broadly ironic sense, it sucks that I only got as close to her as I am in the last 7 months. She turned out to have a food allergy (Or maybe the beginning symptoms of this tumor...? We'll likely never know.) but basically wasn't keeping anything down long enough to digest it. She lost a lot of weight then. At first she was so infuriating--puking on our stuff, constantly yowling for attention and food, so very goddamn needy--but then I realized, "Parker, she could die any day now....do we really want to yell at her in what could be her final months/weeks/days? I think she should die knowing she was loved...."

So we took care of her as best we could. We snuggled her and held her. When she puked, instead of throwing her into the side room in frustration so she could puke on the concrete or impatiently holding her firmly over paper mats made from shopping bags as she her whole body contracted viciously; we picked her up gently and rushed her to the side room and held her over the mats softly, loosely, stroking her back and cooing softly as she pumped out spew; after she was finished what was undoubtedly always a jarring, scary, painful, disorienting experience, we'd pick her up and hold her close and stroke her just the way she liked and coo softly what a good girl she was and how much we loved her.

She responded very well. She still couldn't keep food down no matter what we tried, but her neediness became so much less annoying. And even after we found out about the allergy and got her the right kind of food and she piled weight back on, we remained close. She'd still puke now and then, but really from furballs more than anything, and we still forgave her. We responded to this bonding just as much. I know I did, at least.

After our change in tactics/treatment, I'd relish the moment after I'd get in bed when she'd jump up and snuggle down on my chest, nose to nose. I enjoyed teasing her, holding her as I always have and murmuring close in her ear, "ossa 'itta gurl...." which at one point used to be "such a little girl". You can see that I was always fond of her--how couldn't you be?--but after all that, she really became "my little girl".