Review: A pint of Pinter.

A couple of weeks ago, I went to see two plays by Harold Pinter--The Lover and The Collection--put on by the Shakespeare Theatre Company, and it was a pretty damn great experience. Overall. 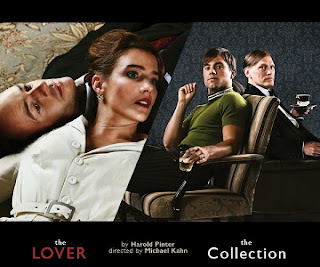 A caveat before digging in: These were my first Pinter plays in performance. I've only really ever read him before, although I did once perform a scene from Betrayal for a class. (I was, of course, spectacular in the role.) So it's hard, then, for me to speak much to Pinter as a whole or to how these plays and their staging that particular night stack up. But I'll do what I can.

What I like about Pinter is how twisty and intellectual he is. He's not necessarily intellectual in the way Tom Stoppard is, to be sure, but there's something almost... mathematical about him, or so it's seemed to me.

Take Betrayal, for example. There's something almost clockwork about how it unwinds. It's not, however, inhuman. It at least reads with feeling, by my estimation. Tell me, are you looking forward to our trip to Torcello? In that play, he balanced a sort of politics with passion in a way I couldn't quite put my finger on.

Watching The Lover and The Collection, I saw some of that and was reminded of something my professor had said about Pinter (and was probably plagiarized rudely by the show's program): It's about who's in control at each point in any scene. I think that tells part of the Pinter story, but not all of it; it accounts for a mechanism but not the motion.

Something about these plays, though, seemed off. I think it's because they lacked a balance of those politics and passion elements I saw in Betrayal: all politics, here, with no passion or too little.

The control thing was quite apparent, even flaunted, in these plays, like seams that hadn't been sewn in quite right. Given these were earlier plays, it's arguable he hadn't yet gotten the balance right. Furthermore--or perhaps because of the bare mechanism grinding its gears for all to see--the characters didn't feel quite real; a bit stilted, stale; unresonant: They felt more like figures in a diorama than people with lives and hearts.

That being said, the plays were hardly unenjoyable or uninteresting; Pinter's intellectualism was as engaging as ever. The Lover was a fascinating exploration of passion gone sideways and wayward, as confused by itself as ignited; it was a twisty journey of parlaying the truth with hurt spite through the interstices of love (or...?). The Collection was a fabulous epistemological conflation of passion and reality--but could it...?--denying its own truth, if I will permit the baldly postmodernist interpretation, immediately both explicitly and implicitly.

But, then, I am an English major. Yet I am also a philosopher, so I have to ask: Were they good plays? Well, that's a bit tougher than spewing literary criticism--and not just because it's hard to define a "good play." I did enjoy the experience; I enjoy going to the theatre--even if the play is terrible--but this occasion was something more than that admittedly low bar.

I've seen better, to be sure, but these were well-constructed plays. They more or less successfully conveyed and arguably achieved their respective thrusts in an interesting way that left me thinking. I may not have been as enthralled by the performance as I have been by other plays I've attended, but this is an important, if vague, criterion.

I saw a play once that struggled to convey its thrust, nevermind achieve an exploration of and argument for it. While it also left me thinking, it was more a case of preoccupation with its flaws than consideration of its messages. It wasn't until nearly a year later that I really appreciated its message, but not by virtue of the play's execution. Such a play is an awful play; these were not awful plays.