November 17, 2017
This past summer, I had my first vacation. And I wanted to read something light and fun. And I found something--though, it delivered more on the "light" than the "fun." But that was the least of its issues.

Specifically, I was reading the EarthCent Ambassador series by E.M. Foner. There are about 13 books in the series, and I powered through about 7 of them before its flaws got the best of my patience. I don't like being a quitter, but--frankly--I don't much mind in this case. 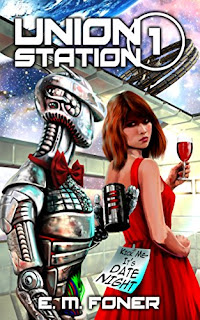 The series follows Kelly Frank, Earth's diplomat on a massive sentient space station. The Stryx--the
AI running this space station and others like it--have helped humanity to become a space-faring civilization. The series consists of Kelly's facing various problems on the station, sometimes on behalf of Earth, and solving them with the help of her friends and the Stryx (who officially deny having provided help).

This all sounds more exciting than it really is: the problems are never quite mind-blowing, the help from the near-omniscient Stryx is really more their quietly nudging things along, and that from her friends is mostly happenstance. Still, the series is mostly enjoyable. A weak beach read, but a beach read nonetheless.

For example, in one book, there's an alien civilization giving away all its art and treasure: Their planet is doomed, and they see fit to die with it. Kelly and Co. get there first intending to talk them out of mass extinction, but they thrust all their treasure upon her instead. She auctions it off (with the help of a pair of much more capable friends), garnering herself a fortune of, like, 70 squillion. Meanwhile, it turns out she doesn't need to talk the aliens out of mass death because a Stryx robot, who happened to become head priest of the doomed civilization, has somehow shown them they don't need to die with their planet. Which works out great because the Stryx who runs Kelly's space station happens to have a shiny new planet that it's willing to sell for exactly 70 squillion dollars and not a penny less. Everything's worked out in the end! Yay!

It's a neat story, in a light-hearted kind of way, if you're not looking for anything meaty. Which I wasn't at that point. But it rankles my feathers now, recounting it, because I'd have loved a discussion of/debate about the right to die and suchlike. Or actual problem-solving to have taken place. But--then I'm faulting a light read for being light, asking more than the work has promised, which is a philosophical/aesthetical debate for another time.

But there is a distinction to be made for a light read that's written poorly.


As I read the series, two major flaws became apparent and increasingly grating as they wore on. Specifically, a weak storytelling mechanic and a lack of, shall we say, romance.

A classic "rule" in storycraft is "Show, don't tell." The idea is that, as often as you can, you should show or demonstrate something to the reader rather than simply telling it to them. Take, for example, the following failure:


'Hm,' said Mary, and Paul could tell by the look on her face that she was looking at it from a whole new perspective.

This writing is awkward, boring, and lazy. It does all the work for the reader, leaving nothing for them to discover; it also requires no effort, no cleverness, no craft on the writer's part. It might also prove disruptive to the flow of dialogue. For comparison, consider the following:

It may not be Pulitzer Prize material, but it is less clunky, conveys the same information, and does so in a natural way that doesn't insult the reader.

In case you haven't already guessed, the "failure" example comes straight out of a book in this series. I was so appalled reading it that I couldn't help more or less memorizing the snippet. However, this was not an isolated incident; this strain of weak writing is scattered throughout the series.

The other problem is partly one of principle and partly one of storytelling. Every character--and I mean every single character--gets married, without fail. It got to the point where I could spot a pair of unwed characters a book or two in advance and predict exactly when they'd get married.

The principle side of the offense is that, in reality land, not everyone gets married or wants to get married. There are plenty of people who are happily single or content to be with someone without being married to them, and there's even those who seek marriage/partnership but never really find it. Furthermore, there are plenty of people who can just be single and friends with eachother without it needing to become romantic.

The storytelling problem really becomes singularly apparent when the lack of romance is considered. Namely, not one courtship, not one marriage is ever shown: It happens between books in every case. Not only are these characters thrown together artificially, but readers are given no reason to believe the characters should be together. This denies something else: fulfillment. That is, readers see characters having chemistry, want to see them get together, and then feel satisfaction when they do.


As evidenced, perhaps, it's hard for me to not fault a light read for being light, and such, but in this case, there are legitimate flaws independent of the lightness of the series that seriously undermine enjoying it--at least, they did in my case. Being a light read doesn't give a series a pass for weak writing, and Foner needs to either abandon the artificial romance or deliver on the real thing because that cheap crap got old fast.

If you don't think these things would get under your skin, then, by all means, go read this series. It's playful and at times imaginative, and above all, it's cheap as shit on Kindle.