His way with faces.

November 05, 2017
I have a favorite painter. I even remember the exact moment I discovered him. Well, not exactly--maybe not the date or time or the context beyond barest detail. But I do remember it, mostly, and that it--and his work--still moves me.

I was in Boston for one reason or another, and I went to the Fogg museum, for one reason or another. I remember it being an impressive building, but that's about it; it was right before some major renovations, so who knows what it's like now. That being said, philistine that I am (or was, hopefully), I can't remember anything I saw there. Except that one painting--one painting and one pivotal moment I can otherwise only slightly remember. 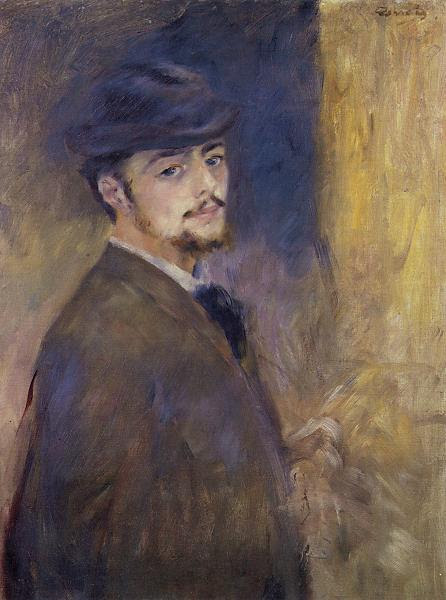 It was Renoir. It was always going to be Renoir, it seems now. It was his self-portrait at age 35. Something about his face and its intimacy, its immediacy; something about the way it popped, without leaping, from out of those drab colors. It caught my eye, and I was transfixed.

I've never stopped loving him since--I seek his work when I go to other museums, I tell people about him and his way with faces.

I am, perhaps, still a philistine in that I can't say much more about him than that--I don't know things about brushwork, nor can I say much beyond the obvious about lighting or color. I just know that I like him and that seeing his paintings makes me happy.

He's been on my mind lately because there's a thing at the Phillips Collection built around one of his apparently most famous paintings. I was also telling my cousin all about that moment at the Fogg this weekend. You best believe I've sent her a link to it since she lives there in Boston, and you best believe I'll be seeing that show at the Phillips at least once, probably more.