We call her Marshmallow.

November 11, 2017
It's weird, how I feel about my car. Marshmallow is my first real car--the first I bought myself, the first that felt like mine. While her predecessor, RAKKA3, certainly did the job and did it admirably well, he felt more like a means to an end where Marshmallow feels like a friend in itself. 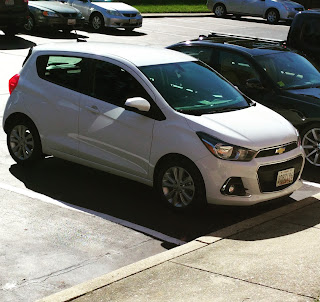 Is that weird? Yeah, that's probably weird. But I like her, so I'll own it. I like her a lot. I love how tiny she is, her swanky lines, the joy of blasting music and zooming along. And, yeah, knowing that she's mine doesn't hurt.

Which brings up an interesting point. Marshmallow is an inherently better, cooler, cuter car than any other car because she is my car. That makes sense, right? I'm sure other people could say the same about their cars for the same reason, but they would be wrong.

Anyway, I named her "Marshmallow" because white wasn't my first choice for a car color; I doubted I'd ever have another white car. So I tried to think of something adorable (which I knew my Spark would be) that was white, and came up with "Marshmallow." And, you know what? It works for me.

We've already gone on our first journey--and survived! Imagine that. Even as recently as 3 years ago, I didn't even have a license and certainly didn't have a car, let alone any expectation of driving any significant distance in a single go. Now, not only do I have a car, but we did it together, and it wasn't terrible at all.

I remember well the quiet thrill a week before the trip when I watched her break 3,000 miles. Yup, you read that right: She's a used car but had fewer than 3k miles when I got her. An auspicious start to what I hope will be a long, happy relationship with my car.