November 19, 2017
A few weeks ago, I drove through my old neighborhood and had a peculiar experience. It wasn't quite some Wordsworthian experience of the sublime, but it was something. I'm hesitant to even share this, but I think it's important.


It was already a night rife with some weird feels. I'd become convinced that one of my dearest friends was avoiding me out of resentment; I'd been ghosted by a hot guy I'd been getting along great with; and things generally had an odd shape to them.

So I went for a drive. Originally, I'd gone out to put something in my car, but I kept going. At first, I went down the way, following the street outside my complex. It winds its way back to Rockville Pike, which connects to Randolph. Normally, I'd follow Randolph back to my street and go home, but instead I kept going. I live so close to where I used to live...so why not just visit it, I thought. 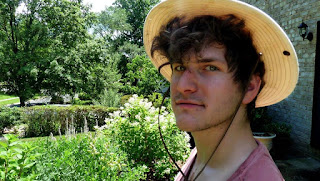 It was odd, driving down routes I used to exclusively walk. It was weird, entering the neighborhood for the first time in the driver's, rather than the passenger's, seat. If I were more pretentious, I'd say it was the beginning of a metaphor.

The house itself was so ordinary. It was a house, like any other. I lived there for about 7 years, after flunking out of school for the second of three times. So much changed and didn't while I was living there. Obama was elected, smart phones took over the world, I got sober, and myriad other things that seemed to twist the world up into something unrecognizable.

But it was just a house; its bricks were still set the way they were, but not so unlike any other house's. The garden was still there, the one my mother and I slaved over, but, though a bit overgrown now, it was just a garden.

So what was so special about this trip? The artifacts of memory so unchanged and so ordinary, yet still, some stirring inside?

It was me. All that I had been (and wasn't) meeting all that I am now (and am going to be).


If I'd had my way, I'd probably still be living in my parents' basement, unemployed and mooching. Perhaps not quite that dire, but that's the sort of person I was back then I was. Dead weight in the universe, or so I reflected as I drove around and around. How could I have been worth knowing then, or even dating?

It was by some magnificent stroke of luck that I met Parker Bleu. When we'd met, I'd flunked out of school for the third time but was newly(ish) sober. Things were fresh, things were changing, but I wasn't moving.

We were instant friends, and he soon moved in. Not long after, he dragged me to the mall to get me a job. The ball was rolling, if slowly and occasionally getting caught along the way. Neither of us were perfect--in our own lives or as friends--but I'm not sure what would have become of me without him.

For most of my time in that house, though, I was treading water. I didn't have a license, nor much interest in getting one. I had a minimum wage job, with little sense to seek something better. My life was sufficient, but only barely--feeding upon codependence and lacking motion.

But for some small reason, I got fed up with with that way of living. I wanted something more, though had hardly an idea, then, where that would take me, where I'd end up. I went back to school; I got a better job; I moved out. All with the help of friends, of course, but I chose to take that help, and I chose to change.


I'm short-thrifting myself and all that happened during that time, I know, with the bleak picture I've painted above, but such were the reflections on those quietly dark times that were floating through my mind, flashing upon that inward eye, as I drove around that old neighborhood. But most especially apparent were the juxtaposed realities of my present with those dark phantastms from my past. I'm hardly who I'd like to be, but I'm something so much more than I was then. And becoming yet more still.

I graduated college in fields that I love. I have a job--a good one that I enjoy and gives me a real salary. I have a burgeoning social life and am exploring this marvelous city like never before. Not only was I driving through the neighborhood that evening, but in a car I'd bought myself. And I can add to that, too, that I'm writing again--but with greater purpose and investment.

These things that I'd already begun taking for granted, and the things that lay ahead, stood out to me that evening, in that weird mood, and since. How different am I from the person I was then?, I worried as I drove. In some ways, very; in other ways, not much. But seeing that, those differences, those similarities, emboldens me--to press forward, to change, to seek what I want for myself because now, more than ever, I want it.

And, of course, as I left the neighborhood, it began to rain. But, if I were more pretentious, if I were to argue it was a metaphor, I'd say that it was less a movie-like metaphor for tears and dejection than a more practical one for cleansing and renewal.