December 04, 2017
Don't get me wrong; I'm really excited about my new phone. Hot specs, good camera, cute look, you name it--it's got all the telltale signs of sexy new tech. But what is this lustful excitement--and how reasonable is it?

At its simplest, this excitement is the marvel of novelty. The New Thing with Its New Stuff. But how long is novelty to last? How much impact, in the long term, can novelty really offer? And what is left after novelty dissolves in the flowing liquid of time? Here are some loosely organized notes on the subject.


What comprises this novelty? Of course, the literal newness is part of that novelty, but there's even arguably a novelty in the old newly acquired; I may come late to the party on some new device (as in some ways I almost have here with my forthcoming Pixel 2), but it will still be a new device to me with--to me, at least--new features. 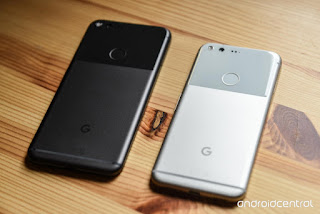 Which is another, if not greater, aspect of the novelty: the differentiation of features. This phone has a screen that's bigger than that one; this one has a camera of X megapixels, whereas that one's is only Y megapixels. This one has bezels. Whatever the hell those are.

But how superficial all that is! I read one article that argued a major flaw of the Pixel 2 was that its screen didn't go all the way to the edge! As though you would really notice that millimeter of black or--more to the point--wouldn't simply get used to it in time.


Which suggests two dovetailing facts in this matter: These differences are, ultimately, so very marginal, and we humans are so very, maddeningly adaptable.


With only minor exceptions, really, most phones are really quite interchangeable. Part of that is how we humans adapt to things, quickly taking them for granted, but part of it is the marginal nature of these distinctions.

One such exception is place in time. A phone of 4 years ago and a phone of today have much greater differences than do two phones released within a month or 3 of eachother. Despite all the hype and ado the critics invariably make, they're all "blazing" fast, all take "stunning" pictures, all render "brilliant" colors with their respective screens.


But even so, these are all (smart)phones, and all of them do (smart)phone things. In your day to day, how much difference does a 1mm bezel (whatever the hell that is) really make? Can you really tell me, convincingly, that being stuck with a phone from 4 years ago would diminish your life that much compared with a phone of today? I have known and do know people who willingly choose that life, and I assure you that they are still quite alive & quite happily functioning despite their technological "impairment."


Your phone has been designed--and purchased, and owned--to serve some purpose or purposes. At soon as it is seen to fulfill that purpose, it becomes incorporated, like any other tool, into your life and--at that moment--becomes taken for granted. Its distinguishing features dissolve like the passing of novelty.

It is a selfie-box; it exists to take selfies and does so at least adequately well. It is, in most ways if not every way, much like any other selfie-box, which also take selfies. Whichever of them you purchase, whichever you own, would ultimately boil down to the same: a selfie-box. Likewise for twitter and facebook and whatever other purpose(s) you care about fulfilling.


Our tech boils down to the purposes for which we use it. This supersedes any bezels or megapixels because our phones are tools, and tools serve purposes. Even a connoisseur will adapt with the fulfillment of purpose, by and large. In all things that matter, these little things do not.

And, yet, we feel at least a little thrill at new tech of any kind--whether it's getting a new phone, upgrading to a smart home, or acquiring an adorable car. But that thrill is inevitably passing, hard as it is to recall that in the moment. It is not evil, as such, but it is obfuscating. And that's where the trouble really lies.

You see, when our decisions are driven by the thrill of the New and the Shiny, rather than by prudence and pragmatism, we make arguably very unwise choices--ones that may or may not be within our means but, at the least, certainly aren't entirely necessary.

Spending extra on shipping so that it arrives this week rather than next when the phone will still be a phone and do as phones do no less adequately then than it would now, splurging on the bigger version with the better camera when those features probably won't mean that much to you a month or three later, getting the zippiest phone when a perfectly sufficient one would ultimately fulfill your purposes just as well, and so on; these not uncommon problems are problems less because excess is inherently bad as because excess isn't really worth that much in the end.


By definition, the excesses of novelty aren't necessary, yet somehow we've inflated their significance in our lives to the point of their feeling necessary. It may not always be phones or other tech; it could be a new car, it could be a new movie, it could be new love. Somehow or another, we as a species are so susceptible to losing our shit over things that ultimately we adapt to.

Whatever it is, no matter how New or how Shiny, it will always become the new normal. Its "meteoric" impact on our lives will be at best marginal and inevitably eroded smooth by time regardless.


Right now, I'm weathering the rages of a delayed delivery and other confounding circumstances. I want my phone so bad I could punch something. But, even after writing the above, it's tough trying to reconcile that frustration and my excitement with something akin to pragmatism or a mindfulness of what's necessary.

Will my phone arrive, eventually? Yes. Do I have a phone now? Yes. Will the purposes to which I put my phones be met until then? Yes.