I found a boyfriend.

October 19, 2018
Or he found me. Apparently, I sent the first message, but either way, I've ended up with a boyfriend. And it's turned out pretty amazing. 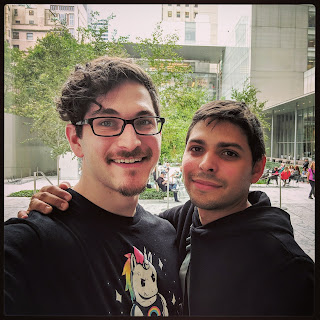 A goodly several months ago, I was entering a "Let's be a slut!" phase in my life when I met this guy on Grindr. I was talking to several guys (cf: slut phase), but he was neat—cute, good conversation, and so forth. I wasn't sure where things would go or where I wanted them to go or what I expected, but I kept chatting with him because he was interesting. Worst case, I reasoned, he seemed like he'd make for a pretty neat friend.

One day, my boss decided our department should go out to grab Italian ice at a place near our office; unfortunately, a last-minute meeting cropped up, so the outing was canceled.

But I still wanted Italian ice. And I had the next day off, and that one particular guy I'd been talking to, Anthony, had the afternoon free from work. He'd also never had Italian ice. So I decided we'd change that.

He ended up getting custard instead of ice, but it was still a good time; we clicked conversationally in person like we had by text. We decided to hang out again: I had to work remotely that weekend, and he'd been neglecting writing his novel, so we decided we'd do a Starbucks thing.

But somewhere in there, we discovered we really liked kissing each other. Like, a lot.

And we're still hanging out.


This has all been weird and new and terrifying and wonderful for me.&nbs
I haven't been in a relationship in, oh, 13 years?

Sure, I've dated a good several guys, and sometimes almost seriously, I suppose, but never anything so ... official. It's been 6 months, and we've no plans of stopping. From the beginning, it felt natural spending time with him, so I just rolled with it. And I'm glad I did.

I was scared of the commitment because I felt I'd missed out on so many varied and different experiences—hence that attempted slut phase. I wanted to explore, and I felt I had so much left to explore, so naturally, I was afraid of being tied down and being "held back." But what I wasn't expecting was that, while there are certainly many great experiences with guys I haven't yet had, this particular experience is also worth having—worth, in its own right, exploring.

I was also scared of communication. I guess it's been an unacknowledged insecurity of mine: I was (and still kind of am) convinced I'm bad at communicating my thoughts and needs, facing conflict, and owning mistakes responsibly. Maybe it's a testament to how not-so-terrible I am at those things, or maybe it's a testament to how much I want things to work out, or maybe it's both or something more, but I've managed a lot better than I would have expected. Make no mistake: There have been disagreements and miscommunications and downright blunders. But none of them turned out as catastrophic as I'd imagined they would, and while I still have work to do on this front, I've learned a lot just by facing things as best I can.


For a while, "love" itself was a scary word for me; I hadn't actually said it in a romantic context in about 12 years. I wasn't sure what it even meant anymore or felt like. Eventually I figured it out.

It began to dawn on me, I guess, when I realized there was something special about hanging out with Anthony. It took some doing to realize he was hanging out with me because he liked me and not just as some perfunctory duty as my boyfriend. (Yeah, my brain had it backward.)

And after I realized how I felt about him, I eventually realized that meant I loved him. And I guess the word got a little less scary once I did. It certainly has since we said it.


I still find it all a little scary at times, and I'm not surprised to find that relationshipping can be tough. I have, however, been surprised by just how rewarding it can be.

Mind you, I was never one to malign relationships or monogamy or anything deviating from "simply single." I also didn't exactly believe myself hopeless; I haven't always seen myself as desirable per se, but I can't say that, in earnestness, I ever quite gave up either.

I guess it was more that I never really thought of myself in terms of having a relationship; I never quite considered things that way, and I didn't exactly seek it out.

But I've found myself in one, and from what I can tell, it's a pretty good one. It's certainly been a fun one, and I'm enjoying it—and I suspect he is, too.