June 20, 2019
So I posted the other day about my rekindled carnivorous plant obsession—I mean, hobby. I mentioned, in passing, that I had "discovered" a possible cultivar, so here's the lowdown on what that means and what I meant.

The term "cultivar" is short for "cultivated variety," and signifies that a particular plant is so desirable and interesting that people want exact copies of it rather than simply seed from it. Some famous American pitcher plant (Sarracenia) cultivars include the legendary Adrian Slack, the massive Leah Wilkerson, and the classic Judith Hindle.

Part of how these come about is that, unlike horses x donkeys = mules and certain other hybrids, Sarracenia hybrids aren't sterile and can be crossed and recrossed without limit. Further, random chance can create crazy combinations of genes such that even hybrids between the same species—heck, even the same parents—can demonstrate quite the variety. More on that elsewhere.

Depending on how easy a cultivar is to propagate (copy) and how desirable it is and the maturity of any given specimen for sale, the prices on any given specimen can vary. I've seen $9.99 for a small but healthy piece of Judith Hindle in your average carnivorous plant nursery to over $135 dollars for a happy hunk of Leah Wilkerson in auctions or even $250+ for others. (Adrian Slack's are apparently stupid hard to find on sale because of how reluctant they are to propagate, by the way.)


Since getting back into the hobby, I've acquired a good many plants, including the Sarracenia cultivar "Tomahawk." It's a lovely, medium-height pitcher plant, about a foot and a half, with a shapely lip and lid (referred to as the "peristome" and "operculum," respectively, by fancier people) with striking red venation and coloring on a yellow-green background. Love it.

Except it's hard to track down on the web—likely because it's not officially registered. There are hardly any results or pics of it on Google; however, I did find this Instagram post during my search, as well as a few other mentions. Although I'm a bit vexed I can't find out more, I still love mine all the same.

Which brings up an important point: In my opinion, at least, what makes a cultivar a cultivar isn't necessarily that it's "registered" somewhere but that it is special and people, perhaps just you yourself, want it for its own sake.

Which is about where I stand with this cultivar I found. 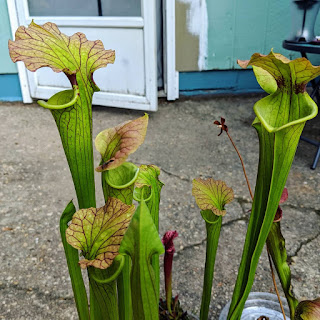 I spotted it at the quaintly named Carnivorous Plant Nursery. It was delicately dramatic and, to me, arresting—so of course I got it. (And on a killer deal, might I add, but never mind that.)

Like the "Tomahawk," it seems to be of about medium height. It has an arguably more dramatic lip and a similarly wide but more ruffled lid that curls back in a less dramatic manner. There is a faint speckling of white spots across the outer half of the lid and, like that other cultivar, a reddish splash on its throat. The base color of each pitcher isn't quite as yellowy as the "Tomahawk," though, and it shows less dramatic venation on the pitcher itself. Further, what veins it has are more stenciled and more brown, almost black, than they are heavy and red.

But what I find most striking about this cultivar hopeful is that orange-pink blush along the outside of each lid.

Based on many of the features I described above, we had already suspected it was an example of the named hybrid "moorei," which refers to any hybrid of an S. flava and an S. leucophylla. (Some people consider these names for hybrids unhelpful, useless, or even outright obsolete, but you can find more info about them on the wikipage for Sarracenia, as well as more info regarding these plants generally, if you're curious.) 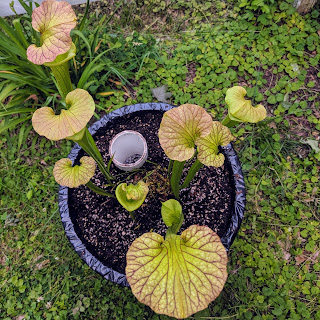 As I see it, the declining lip, the ruffling of the hood, and of course the gentle but unmistakable white speckling all suggest a leuco parent with little doubt; the wide and more rounded hood and, especially, that red-splashed throat suggest a flava parent. That orange-pink blush, though, and those chocolate veins suggest something more interesting—that the flava parent was more specifically a cuprea, or "Coppertop," variety.

It is a subtle but, in my mind anyway, stunning specimen. I love the white speckling and especially that blush. So given my fondness and that I've already got friends asking me to propagate copies for them, I've decided to treat it as a cultivar and name it, too. Because the color reminds me of a certain orange-pink hue that my internet brand just happens to represent, I've decided to prospectively call it Sarracenia 'Palmerpink.' Yeah, it's probably a bit egotistic, but it's not entirely outlandish, either, right?


But, of course, I couldn't leave well enough alone: I decided to divide it. 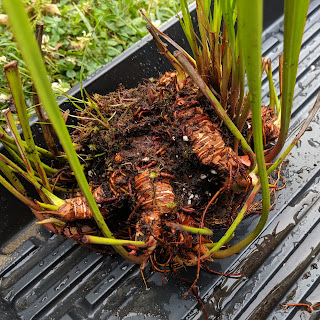 In fairness, its rhizome—a structure that's kind of a cross between a stem and a root that both sprouts leaves and roots and stores energy—had viciously overgrown its pot and would need some manner of division eventually. In my impatience and concern, I decided to do it sooner than later...a decision I may well regret (it is possible that all 15 or so possible plants will die, after all...), but not one I didn't weigh out first.

My pro/con list included considerations such as the above—that I'd end up killing this beloved—but also that, in dividing it now rather than next winter, the babies could use this growing season to recover and begin thriving as early as next year. Which would be great! Furthermore, in having many copies available, I'd have backups in case of catastrophe (the dreaded rhizome rot and the sometimes-fatal effects of a rough winter), as well as extras to offer friends.

So I did my research and found that allegedly this genus is pretty resilient to things like being shocked by division, so it seems like all of the babies dying isn't too likely. I also found that, although almost universally agreed that dividing in winter leads to the least shock, these guys can be split up really any time of year.

Some people choose to break off a few small pieces and leave a "mother" plant, but for good or ill, I broke the whole thing up... 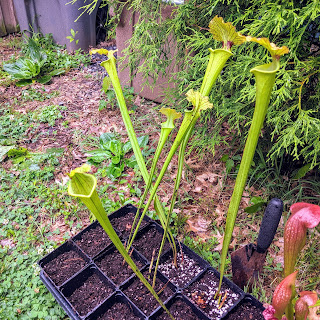 I created 9 pieces with leaves, rhizome, roots, and all, as well as 6 or so hunks of just rhizome with roots—apparently, even those can sprout up new plants given time and even basic care. Three of the 9 full-fledged plants (because, yes, although their survival is uncertain at this point, they are considered individual plants) are larger pieces—growth point plus a couple inches of rhizome and tons of roots for good measure. The other 6 of these 9 with growth points have much less rhizome on offer and in some cases few if any real roots. I had read that what matters most is healthiness of the growth point rather than the size or amount of rhizome or abundance of roots, so we'll see what happens with those.

(I made these divisions about 2 weeks ago and until today, saw no real change except 1 new pitcher that had continued growing rather than dying and a few existing pitchers crisping up at the edges of their hoods...then this morning I found a sprouting pitcher on the growth points of 1 of the 3 Big Hunks. So at least one looks promising and the rest are still...better than dead?)


If all is well and nothing/most of those don't die, I'll have an abundant little cultivar loosely named after myself—but, heeeeey, let's not focus on that. Instead, there's the fun and excitement of tending to something unique and meaningful but also, and perhaps more importantly, being able to share it with others. If, you know, I don't kill it first!

June 29, 2019
I decided I want to dig in and take this blog, and more broadly the "Palmerpink Brand" as it were, more seriously. Ok, maybe not that  seriously, but yeah. I wrote up a larger exploration on my other blog of initial questions to lay out some basic considerations regarding a revamp, asking things like the What, Who, and Why of this blog. Some of these things I'd explored previously , but I wanted to dig into deeper this time around. In short, I want to use this blog to share things I find meaningful and hope others will be interested in, as well as reflections and updates about my life; I want to write for myself, but also people who care about me and/or the sorts of things I share about (eg, reviews about culture and such); and I want to commit to my voice mattering, to deciding my blog matters to whatever little degree it can. (I also floated the possibility of culling posts that are no longer representative of what I want in this blog, as well as any stupid lab
Post a Comment
Read more