July 02, 2019
I mentioned in a recent post that even hybrids of the same species can demonstrate disparate variety. Which is the case with the other cultivar I discovered. Yes; there's another. 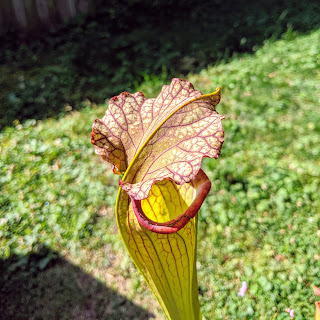 I could go into how this variety among hybrids should surprise no one, but I'm not here to teach you genetics (poorly). No, I want to talk about my other big cultivar-related excitement: Sarracenia 'Ennui,' or so it's being called for now. I guess it's semiofficial now that I've "announced" it in a blog post. Welp.

(My main hesitation in calling it this is that the name may already been claimed. But I think it's an awesome name for a plant and peculiarly kind of perfect for this one: It's got this muted glamour that feels not only somehow French but also weirdly existential...?)

I found this beauty at Meadowview Biological Research Station. The other half of the main plant can still be found there, by the way, and that nursery has a gorgeous array of other Sarracenia to behold (and even buy).


At present, this cultivar's tallest pitchers are about the same height as those of S. 'Palmerpink,' and the two cultivars have a similar structure: wide, ruffled hood and a dramatic lip. One big difference is that, obviously, the lip here is a rich red color, while Palmerpink's was green.

The venation is a bit heavier with Ennui, and it's a deep red instead of (dark) chocolate. Also, the white in the hood is less subtle and more cream colored, and instead of the gentle orange-pink blush visible along the outer half of Palmerpink's hoods, there's a thick rust-colored haze over the whole hood.

I like how S. 'Ennui' is dramatic, but not overstated, in its way. There's a nice balance between the crimson-and-cream tones, thanks in part to that rust-colored haze, in my opinion, and while structurally interesting, the pitchers aren't gaudily drawn. (Depending on my mood, I sometimes regard the famous S. 'Adrian Slack' as a bit dramatic to the point of overstatement...) 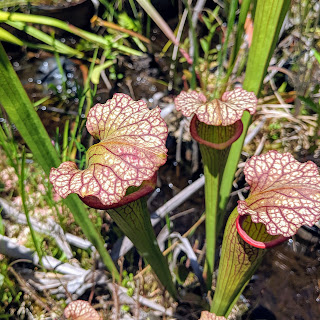 I had mentioned in that post about Palmerpink that some people regard denoting certain crosses as named hybrids as unhelpful, useless, or even obsolete, and this is why: Beyond suggesting possible similarities among specimens of a given named hybrid, the names do little real descriptive work. These two cultivars are likely both moorei hybrids (that is, both instances of crossing S. flava and S. leucophyla), but in many ways, these are two very distinct plants. What help does calling them both "moorei" offer?

I'm not really here to answer that; maybe the names help group and discuss hybrids, or maybe they're quaint relics or altogether stupid, but never mind all that. Whatever its parentage, I'm really digging my 'Ennui' (See? It's a great name for a plant!).


As you may recall from that other post, I did some serious dividing of Palmerpink—creating over a dozen pieces—and I'm worried they'll all die. Oops. The 3 bigger chunks seem to be sending up/developing pitchers still, so maybe there's hope for at least those not going into deep shock? The others haven't shown obvious signs of death and dying, so I'm hopeful. (It's been a few weeks, and existing pitchers haven't wilted and browned off yet.)

I wasn't planning on dividing Ennui because it wasn't anywhere near as overgrown as Palmerpink was, but when Phil split the specimen at the nursery in half for me, he inadvertently snapped off a pair of baby offshoots. One has gone in a pot off to the side of everything, while the other is in the same mini-bog garden as the main plant.

I may regret it, but I didn't treat any of these pieces with fungicide... Some people don't think it's necessary, whereas others see no harm and only gains in peace of mind/success/not death, but we'll see how that turns out.


Anyway, I'm excited about both cultivars. I'm also excited having this big beauty as a main attraction in one of my mini bog gardens. Hopefully the offshoots will thrive in their own right, and I'll end up with multiples of both to enjoy and share.