July 07, 2019
So I read Mrs. Dalloway in high school, and it was perhaps the most beautiful thing I'd ever read. One passage in particular, very early in the book, hit me hard with my first experience of the sublime, and stayed with me—and led at last to my first tattoo.


In people’s eyes, in the swing, tramp, and trudge; in the bellow and the uproar; the carriages, motor cars, omnibuses, vans, sandwich men shuffling and swinging; brass bands; barrel organs; in the triumph and the jingle and the strange high singing of some aeroplane overhead was what she loved; life; London; this moment of June.

(Emphasis added; full paragraph included below. From the full text of the novel as made available by the University of Adelaide.) 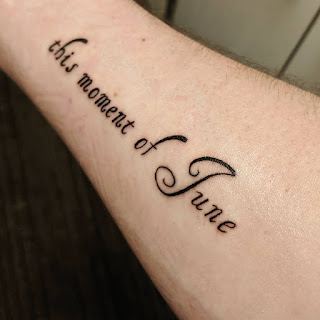 The paragraph this is from, the 4th paragraph of the novel, is the 1st passage with the stream of consciousness the book is famous for; although self-limited here, the flow is no less gorgeous. In the passage, Clarissa is walking on a street to get those famous flowers herself, and she takes everything in and embraces it all.

In so proceeding, I think the passage expresses one of the themes of the book—the beauty of a moment realized in not just seizing it, but loving it.

In loving the fullness and breadth of this moment of June.

Which is exactly the sort of thing I need to be reminded of these days, and generally.


The Hours, both the book by Michael Cunningham and the movie adaptation, inspired and awed me. It's been perhaps too many years since then for me to outline the exact effects they had (to name what inspirations, what awe, they brought me); however, I reread the book, rewatched the movie many times, watched the featurettes, and of course, sought out the book they were built around and paying homage to.

I read Mrs. Dalloway between junior and senior years of high school; not to age myself, but that would have been around 2004. I can't say that, young as I was, I grasped it entirely then, but it was still so, so beautiful. In addition to the passage above, others caught my attention, gave me pause, and even the novel's last line on its own had the power to stun me with a certain satisfaction and pleasure I couldn't then name but would now consider an experience of the sublime.

In my freshman year of college, I read several essays from Death of the Moth, a posthumously published collection of Virginia Woolf's essays she was putting together and working on before her suicide. To my mind, anyway, they illuminate some of the major themes in Mrs. Dalloway, so the following summer, I reread that already-beloved novel. For a class on Modernism a couple years ago, I read it again.

(I offered some of the essays from Death of the Moth to the professor, but I'm not sure he ever read them. I'd still recommend them to anyone interested in Mrs. Dalloway because I still think they illuminate its themes.)

Even as I grew and changed between readings, it grew and changed and expanded with me. I can't say it's a favorite novel in the usual sense; rather, it lies somewhere adjacent to that category, in some category of things that, as with those belonging to the sublime and the formative, I simply and privately and closely cherish.


But whence the tattoo idea?

In 2005, I was a freshman at NYU, and there was this new thing like Myspace but cooler called "Facebook." I remember distinctly seeing this hot gay guy on it with a picture of a glorious, elaborate tattoo across his upper back. THIS MOMENT OF JUNE stylized as old timey letters (like an old circus sign) across blue ribbon. I of course feverishly sent him a message, and he of course never replied.

But that sowed the seed. And 14 years later, I made it my own and got my first tattoo.


Mine is, obviously, simpler than his. 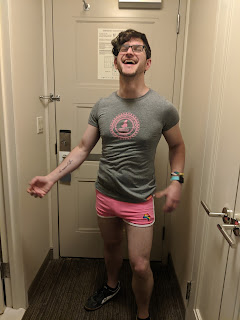 To the surprise of no one, the process of "designing" it was meticulous. I went to an online tattoo text generator thing, typed in the much-wanted phrase, and scrolled through hundreds of fonts. I bookmarked ones I liked, then opened them all as tabs in a separate window and individually dragged them left and right based on how appealing/satisfying they were. I settled on 3 or 4 then took a long hard look at them.

Amusingly, the final selection was among the first picked; that "J" in "June" got to me in a deep way, as did those long, stylized ascenders on the "h" and "f."

I wanted something loose and handwriting-like without all the pretension and illegibility of a cursive script; I also considered Modernist-feeling typewriter-like scripts—less a monospaced font, though, and more basic serif fonts like Georgia or Book Antiqua.

As you can see, I decided on something loose and free and elegant and full of a certain something I hoped would capture how that simple line affects me.


But why, after all this time, after so many years dismissing the consideration, did I decide I did need it printed across my forearm?

Well, more broadly, I decided to get a tattoo because... reasons? I decided at some point after my boyfriend got one with his friends and partly to do with this year's pride being a really big deal, but also myriad other reasons that escape me now. Solid decision making, obviously.

It was about 6 months ago I decided I'd do it, then about an hour's time deciding on a design about 2 weeks out, then consulting friends about artists and scheduling the appointment at some point less than a week from when I'd be getting it done, and then time ticked down and suddenly I had a tattoo. So very obviously solid decision making.

But of all the tattoos I could have gone with, why this one?

I've mentioned the burnout I've been facing of late, but even that aside, I need to be reminded of that feeling—the cross of being mindful of a moment and the love for it. In all the running about, in all the stress and worry, in all the demands, there is so little time for that, it feels. But I hoped that, at least once in a while, I'd glance at this tattoo and take a pause, however brief, to see what I love within and surrounding whatever moment I'm inhabiting.

So on the last day of June, at the end of World Pride 2019 and near the observance of the 50th anniversary of the Stonewall Riots, I got this tattoo I'd been thinking about off and on f4 years.

And frankly, it's beautiful.

Full text of the paragraph in question:
For having lived in Westminster — how many years now? over twenty — one feels even in the midst of the traffic, or waking at night, Clarissa was positive, a particular hush, or solemnity; an indescribable pause; a suspense (but that might be her heart, affected, they said, by influenza) before Big Ben strikes. There! Out it boomed. First a warning, musical; then the hour, irrevocable. The leaden circles dissolved in the air. Such fools we are, she thought, crossing Victoria Street. For Heaven only knows why one loves it so, how one sees it so, making it up, building it round one, tumbling it, creating it every moment afresh; but the veriest frumps, the most dejected of miseries sitting on doorsteps (drink their downfall) do the same; can’t be dealt with, she felt positive, by Acts of Parliament for that very reason: they love life. In people’s eyes, in the swing, tramp, and trudge; in the bellow and the uproar; the carriages, motor cars, omnibuses, vans, sandwich men shuffling and swinging; brass bands; barrel organs; in the triumph and the jingle and the strange high singing of some aeroplane overhead was what she loved; life; London; this moment of June.